My ultimate dream while at home on the ranch was not to be famous but rather to play in a good band in bars. There is no high like being on stage when the band is smokin” hot. I envisioned the good life, selling oodles of records and tapes on stage. And with me being a single guy and looking with one eye on the sly, in theory I would be bound to run into my one and only, with all the good looking girls I would have at my feet every night. About 1973 I started taking off from my home during the winter months for a few weeks or a few months at a time. I joined different bands and played in bars from Winnipeg to Vancouver and even a few in the states. 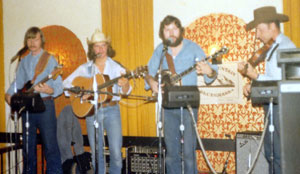 Many times I would close out the jobs and on my way home to Saskatchewan, I would sometimes stop at my brother in law and sister’s place north of Edmonton. I would usually assure them that I would not be coming up here anymore to play in these bars, but some time later, I would pull into their yard, all smiles, and my vehicle all loaded up with amps and instruments. They must have gotten tired of me changing my mind so often. To say record and tape sales were slow would be an understatement. Many times someone sitting at a table full of beer jugs and glasses, and piles of money on the table would say, “I would really like to buy your tape, but just don’t have the money tonight” or “I’ll take the tape and come back and pay you tomorrow night.” My “Miss-right” was slow coming through the door as well. I used to get a kick out of the single musicians that would often say in so many words, that they “were looking for a good decent girl with no bad habits”. If I did finally meet someone that I thought was compatible it seems like I usually ended up with someone that was either singing, crying or fighting. I won’t try to describe living in hotel rooms. The many songs written about lonely hotels speak for themselves. Waking up Sunday morning and looking out side and seeing some broken glass and maybe even a little blood on the sidewalk and then driving halfway across the city looking for a place that is open so you can get a cup of coffee are just some of the exciting things of the big cities. I think Kris Kristopherson’s song that Johnny Cash sings, “Sunday Morning Coming Down” describes it very well. The musician get togethers were enjoyable, however.These were the going for coffee times, after getting off stage, where musicians from different bands would meet. Sometimes the conversations would resemble a support group for abused musicians. The guy cussing out the miserable hotel manager, or a common gripe, “This drunk who insists on coming up and playing your guitar or fiddle”. Another common one “Boy did I get into trouble, this girl that I took out didn’t tell me she had a husband!”Or vice versa. After quitting time at this wild and noisy bar, and almost not being able to take another guy coming up to me and telling me his dad or uncle used to play with Don Messer, I would often go alone to this quiet all-night pizza place where a gorgeous dark girl worked. The stunning quiet and sensible down to earth talk was a welcome change. My dad used to call this “Beer Parlor Dummy Talk”. To be absolutely fair though, I have met some very nice people in bars. Another incident that stands out in my mind, sitting at a bar table at break time, in Jackson Hole, Wyoming with three musicians with puzzled looks on their faces and saying “What in the world are you doing down here in this dingy bar?” It was after someone asked me how many cattle and land I had back in Saskatchewan. Many times I came off the road to the ranch just before calving time. The peace of being out in the country was exhilarating. Sleeping in my own bed and opening my own refrigerator was awesome. The diesel smoke from the tractor and the smell of the barn and feeding grounds were like lying in a bed of roses. My brothers and friends all viewed this as me getting back from holidays and getting back to drudgery. I never tried to explain to them. They would never believe me.