In 1969 I recorded my first LP of fiddle instrumental tunes. Then collected all the big pieces of cardboard I cold find for mailing out to hundreds of radio stations in Canada and the USA. Quite often a few letters of thank you came back in the form of requesting an LP. 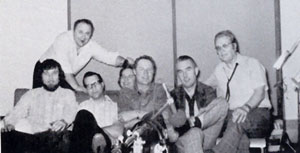 A second LP recorded in 1974, “Two Sides of Old Time Music”. One side was fiddle tunes and the other side accordion tunes. I over dubbed a lot, adding a mandolin part into each fiddle tune. John Muirhead of Gaby Haas fame played sax on the accordian tunes. Joe Kozak,a musician and recording engineer, who has worked with many of the early day famous western Canadian artists, done the recording in his Edmonton studio. Joe continued being a good friend of mine. I’ve relied on him for a lot of advice,being an old pro in the music business. Then the years and a few albums later, took me up to 1997 when I decided to record my “Listening to the Past” album which was a collection of old songs that I’ve heard on early day TV shows. I tried to alter my voice and used some Scottish and Irish accents on the various songs. I then played all the backup music on the recording, except for the bass and studio drums. Studio engineer, Garry McDonall put his 30-year studio experience to work in his Edmonton “DAMON” studio. Garry and I formed a good friendship and working relationship. So much so, that I decided to do another album soon after. This time, singing the songs of my old childhood idol, Wilf Carter. We recorded it the same way again in the studio and pulled it off again. This resulted in my “My Tribute to Wilf” album. In 2001 and 2002, I rounded up some of the best musicians I could find and with lots of hard work, came away with my “My Kind of Music” Album.