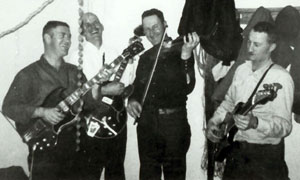 Our musical ability must have been inherited from our mother. As a young girl she played piano at neighbor get-togethers and barn dances, and she was the first organist in the first Catholic Church that was built in our area in 1918. In 1963, brother Joe, cousin Leonard Hardes and myself, started playing together for dances. A few others joined us at different times. We continued playing together for 25 or more years. We played for a few second-generation wedding dances. 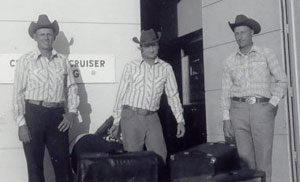 We started out in the days of having to hide your drinks outside and having to watch for cops. We also played for a few rodeos; fiddle tune backing during the events. We were excited being up in the little booth with the announcer, being familiar with the sport,and knowing many of the competitors who competed in infield and chuckwagon events. One rodeo, where the gas engine that ran the power plant for the grounds was balking and missing, I can still see Joe putting down his bass and getting a screwdriver and pliers to try to get the engine running smoothly again. At another rodeo,A long lineup at the only outdoor toilet, with no inside door lock. A friend of ours went to a bluff, timing it at the exact time that a loose bull started running towards the bluff. Only a few of the humorous old memories of those fun days. Later on however, I started getting turned off of rodeo a bit, when I watched the stubborn bulls being whipped and pulled into the chutes. Also the dogging steers being twisted down again and again with their already sore necks. I found it harder to be part of this sport that I once loved. Thinking back now, I think we did pretty good, playing our music over the years with our little band. We never once got into a fight and no one has ever ran off with someone else’s wife. 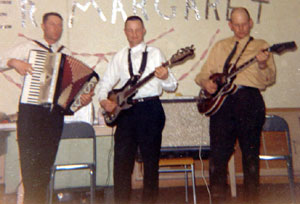 Dad never did hear us play, and even when I recorded my first album in 1969, he was not aware of it. When we got our first TV in 1956, dad surprised us when he told someone, in his German accent, “That singing and dencing on there, I likes that.” His absolute favorite was the fiddle player, Don Messer.Little did he know,that I could play almost as good as Don Messer. Dad hated beer parlors, dances, cowboys, rodeos, or just generally anyone or anything that would keep someone from doing a good days work.

Pa’s been gone for 32 years now. If he could come back from the grave, I am sure he would not recognize me in my conversation with him, as I would shake his hand many times over. So your teenagers out there, who pierce your tongue, or leave your belly buttons showing, or wear jeans with tore knees, my advice to you is “hang in there”, I know what you’re going through.